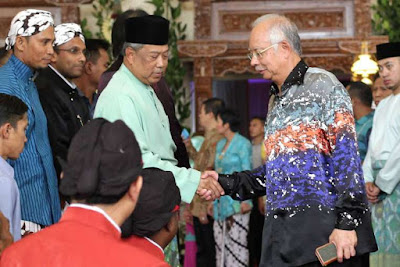 Malaysian Deputy Prime Minister Muhyiddin Yassin says he asked Prime Minister Najib Razak to step down as chairman of the board of advisers at the controversial 1Malaysia Development Berhad (1MDB), but the PM ignored his advice.

A report in the Malaysian Insider said Tan Sri Muhyiddin said he had had no ill-intentions by suggesting this, but had not wanted Datuk Seri Najib's name to be tarnished because of his involvement with the debt-ridden state investment vehicle.

"I told him to let go of his post in 1MDB, but he didn't want to listen," Mr Muhyiddin is reported to have said.

On Sunday night, according to The Star, Mr Muhyiddin said the PM himself should personally take the lead to explain the issue to the people, adding at the closing of a Cheras Umno meeting that the government should not underestimate the people’s negative sentiments towards 1MDB.

He said he had chosen to break his silence and speak up publicly as he was on an Umno platform.

“Don’t underestimate the people, we cannot lie, when the Second Finance Minister explains on 1MDB the critics rebut him and when the Housing Minister speaks he is also rebutted.

“We cannot explain properly because even we don’t know the real facts, so who is going to tell us the real facts, it should the Prime Minister, true or not,” Muhyiddin asked the delegates, according to The Star.

In his 70-minute speech, Muhyiddin admitted that he led a movement to urge Tun Abdullah Ahmad Badawi to resign as prime minister after the 2008 general election.

However, the situation now was different, as he felt that Umno was in a weak position and could not afford a leadership tussle.

Referring to his criticisms of 1MDB, which he made during a closed-door party session that was leaked,  Muhyiddin said he told the Prime Minister the same thing.

“I support the move to probe 1MDB but still some people think I want to somehow do in the Prime Minister.

“I have no malice, why should I, but I have to speak the truth and give my views and advice.”

The Deputy Prime Minister repeatedly reminded delegates that he was not against Mr Najib and that he was part of a team equally responsible to defend the government’s decisions and policies.

He said he was vocal during Cabinet meetings on 1MDB and other issues but was reluctant to speak publicly as he was concerned that his comments would be manipulated to make it look as if he was going against Najib.

At this point, Mr Muhyiddin pointed to the media who were present and advised them not to twist his words, said The Star.

In his wide-ranging speech, Mr Muhyiddin touched on other subjects which affected voter perceptions towards Umno, which included GST and Tun Dr Mahathir Mohamad.

He said he had asked at a number of meetings and gatherings whether Barisan Nasional would win the next general election and the response was always negative or uncertain.

“I say this not to blame anyone because I too am part of the system and among the people responsible to help the Prime Minister but I feel worried if we fail to manage some of the important issues well.

“I want to give you a stern warning that if nothing is done now to manage these issues, Barisan will lose, God forbid.”

Mr Muhyiddin said he has been in touch with Dr Mahathir but he keeps the Cabinet briefed on these meetings.

He said Dr Mahathir should be regarded as a father figure and that the more the elder statesman was “attacked” the more popular he would become and cause more people to dislike Umno as a result.

“This decision is made because we want Umno to be strong again,” he said.

Syed Ali also called on party leadership to initiate move to “restore” relationship with Dr Mahathir, saying that Umno was at the losing end if “we are at war with him”.

In a separate report, Mr Muhyiddin allegedly claimed he had to read The Edge to get information on 1MDB.

The DPM then said that if news reports on 1MDB by The Edge could not be trusted, which source could people trust.

"I myself also found it difficult to understand what was going on with 1MDB, and so much so that I had to read The Edge." - SUMBER
Posted by Jeepers Creepers at 11:00 AM